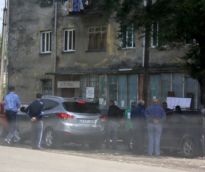 Photo from Baghdati showing the car allegedly belonging to a policeman parked outside the voting precinct. (Interpressnews.)

TBILISI, DFWatch–In Georgia, a by-election is underway in three election districts. Turnout is largest in Baghdati, a town in western Georgia, where 21 percent (5 000) voters already had cast their vote by noon.

Results at precinct no 21 in Samtredia were abolished after a complaint from the Georgian Young Lawyer’s Association (GYLA), which noted that the documents accompanying the ballot boxes didn’t contain the signatures of the Central Election Commission representatives. The results contained only 29 votes.

Meanwhile, another violation was observed in Baghdati, where Deputy Gamgebeli, the local head of government, was illegally observing the process of voting under cover of being an election observer for an organization. His ID card as election observer was taken from him and he will not be allowed to follow the rest of the election process.

GYLA discovered the same type of violations in Samtredia. They accuse Levan Bobokhidze, a member of the municipal assembly in Khoni, of having illegally monitored the election process.

Saaksahvili’s United National Movement plans to demand that the results are annulled in several precincts.

UNM members Gia Tevdoradze and Avtandil Sturua held a briefing about violations. They said about 20 complaints have been filed.

The UNM members claim that a police official in Baghdati was harassing members of the election commission.

“He took them one by one to the car and spoke with them,” they said, adding that it can not be ruled out that this official was instructing CEC members to commit certain violations.

The Ministry of Internal Affairs denied that a Baghdati police official was involved in the election process.

According to the most recent figures, the largest turnout is still seen in Baghdati district, where 15 percent had cast their vote by 15:00. 31 percent voted in Samtredia and 18 percent in Nadzaladevi.