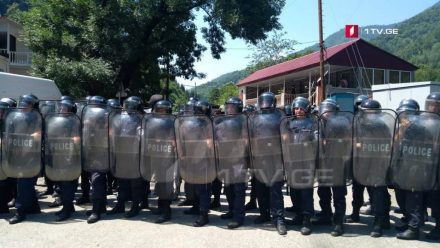 TBILISI, DFWatch–Villagers clashed with police in the highland Svaneti region of Georgia on Thursday. The unrest was triggered by the arrival of the finance police.

The confrontation lasted throughout the day during which locals blocked the only road connecting the popular tourism destination to the rest of Georgia, causing troubles for hundreds of tourists.

In the evening, after hours of negotiations with the authorities, villagers eventually ended their blockade, but only after the government took a more conciliatory stance and withdrew riot police from the villages Khaishi and Chuberi.

The conflict was triggered by an attempt by authorities to control unregulated logging, which, locals argue, is necessary for their survival. When inspectors from the Investigation Service at the Ministry of Finance arrived in the two villages in order to shut down illegal timber processing facilities, they were met with aggressive resistance by locals.

The conflict was so bitter, the inspectors had to call in the riot police. Locals stood up to the law enforcers with swinging clubs and shouting. Several men were injured, some media outlets reported. But later the government denied any physical confrontation and injuries.

The resistance by locals was so fierce that authorities eventually had to withdraw both the financial police and the units of riot police.

The Investigation Service later issued a statement saying the raid was related to the fact that the scale of illegal logging has been on the rise. When the inspectors attempted to check timber processing facilities, locals attacked their car with stones and clubs, thus posing a threat to their health and life; hence, they had to ask the riot police for protection, the Service spokesman said.