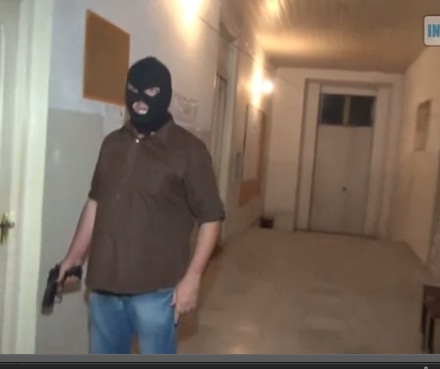 Info9 showed this footage of an armed man entering an election precinct in Khashuri on election night October 1. (Info9.)

TBILISI, DFWatch — A video was publishedThursday showing a person wearing a mask breaking into one of the election precincts in Khashuri, a small town in eastern Georgia.

On election day Monday, there were reports about special units breaking into several precincts in the same region during vote counting that evening. This was confirmed by local non-governmental organizations which were observing the election process and a number of eye witnesses.

The footage shows a person wearing a mask holding a pistol threatening people around him. He runs into voting precinct number 10 in Khashuri and enters one of the rooms and demands people gathered in the building to leave the place. Then he enters the voting room together with election commission members.

The vodeo clip was published by info9, which is an online outlet, and shows scared commission members inside the room. Police came to the spot, also special units, who made armed persons leave.

Transparency International Georgia, which was also monitoring the election, October 2 reported about violations in several districts in Khashuri, writing that special units broke into precincts and changed the protocols.

The statement says that at precinct No 46, the Georgian Dream coalition was gaining a majority of votes, but shortly after armed persons appeared at the place throwing out all observers. They wrote a new protocol, which indicated victory to the National Movement party of President Mikheil Saakashvili.

The interior ministry denied that police had used force at voting precincts, but explained that police defended the outside perimeters where some problems were observed, but no guns or other means of force were used, the ministry claims.

Georgian Dream coalition representatives and non-governmental organizations demand that the election results at regions where same problems occurred are annulled. The Central Election Commission promised to discuss this issue, but has not yet made a decision.

Meanwhile, government officials and leader of coalition calls for Georgian Dream supporters to stop their rallies and street protests and solve all problems through the court system.