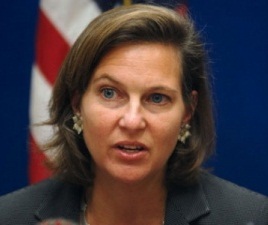 TBILISI, DFWatch–US Assistant Secretary of State Victoria Nuland is visiting Georgia on Tuesday as part of a Caucasus tour.

In Tbilisi, Nuland plans to meet with representatives of the government and opposition, as well as non-governmental organizations, so-called NGOs.

According to the press office of the U.S. Department of State, her visit will be dedicated to cooperation and regional issues, but also ‘Georgia’s path toward European integration and Georgia’s efforts to defend its territorial integrity and sovereignty.’

On February 16, she arrived in Baku. The stay there was aimed at discussing trade and investments, energy and security issues, counter-terrorism and other issues, according to the State Department’s press release.

February 18, she will depart to Yerevan, Armenia. One of the topics of discussion for Armenia and Azerbaijan is settlement of the Nagorno-Karabakh conflict.

Nuland is most known for her  role as an outspoken supporter of the protest camps in Kiev one year ago, that led to the violent overthrow of then President Yanukovich.