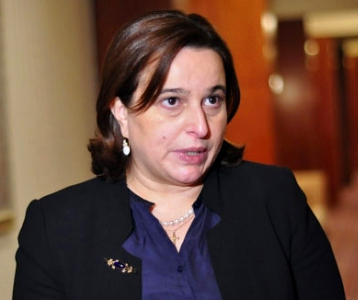 TBILISI, DFWatch–The vice speaker of the Georgian parliament confirms that she approached the president’s pardon commission and requested to have certain prisoners pardoned.

The admission came after a newspaper published information based on anonymous sources that she and other officials pressured the president’s pardon commission.

A few days ago, the former and current head of the commission said they have been approached by government officials who demanded to release particular persons from prison, or consider certain prisoners’ cases without considering the circumstances.

On Monday, Kviris Palitra published an article, based on an anonymous source, about one such case of alleged pressure against former commission head Aleko Alisashvili.

According to the Ministry of Internal Affairs, police detained five persons on June 2, 2010, for drug crime. Investigators claimed that a citizen of Greece and a Georgian living in Spain were regularly sending shipments of various goods to the five detainees with cocaine hidden in the goods.

One of the detainees was Anastasia Zautashvili, a person whom certain politicians wanted to have released.

Kviris Palitra writes that Nugzar Bochorishvili attempted to get Zautashvili, his girlfriend, released as soon as there was a change of government, and he approached Manana Kobakhidze, Vice Speaker of Parliament, and Eka Beselia, who chairs the human rights committee. Beselia had previously worked as a lawyer for the five detainees. Bochorishvili wanted to put the name of his girlfriend on the list of prisoners to pardon, but the plan failed.

The newspaper’s anonymous source claims that after this, there was pressure on pardon commission. The case was sent to the commission in July, 2014, but Zautashvili’s case was rejected because she hadn’t served half of her sentence; one of the criteria for being pardoned.

The source claims that Beselia and Kobakhidze demanded from Elisashvili, who then chaired the pardon commission, to push Zautashvili’s case.

Beselia didn’t wish to comment beyond saying that she will wait until the investigation is completed.

Kobakhidze, however, told Kviris Palitra, that she demanded to release the detainees in this case. She said it was a complicated case and she is confident that the five are in prison on the background of ‘serious procedural violation’.

“They got testimonies as a result of pressuring witnesses and there are lots of unanswered legal questions,” she said, adding that Zautashvili isn’t feeling well and she has three children, which also was a reason to apply to the pardon commission.

“I might have asked Elisashvili about her after officially sending the application to him, and asked not to get the case stuck on a shelf.”

Kobakhidze wants Elisashvili to publish details of their phone conversation and she also wants to be questioned by the Prosecutor General’s Office.

Elene Tevdoradze, who was head of the pardon commission for eighteen years, told Interpressnews on Monday that during her tenure, she received many calls from different people, including members of parliament, but she ignored such calls.