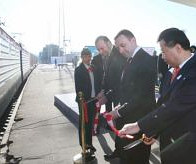 The arrival of the 21 wagon train, whose final destination is Istanbul, marks the official opening of the Silk Road, the Georgian government announced.

“We are able to get goods in an unprecedentedly short period of time – 8-10 days from China – and send it to different countries in Europe within three to five days,” Prime Minister Irakli Garibashvili said during a welcoming ceremony at Tbilisi’s central railway station on Sunday.

He was accompanied by the Chinese ambassador to Georgia and the director of Georgian Railway.

The train, which is decorated with the flags of Georgia, Azerbaijan, Turkey, Kazakhstan and the EU, left from Lianyungang terminal in China on November 29. Before arriving in Tbilisi, it passed through Kazakhstan and Azerbaijan.

According to a government statement, the train needs from 14 to 15 days to complete its journey to Istanbul from Lianyungang in China’s eastern part, while a ship will need from 40 to 45 days.

One more train will pass through Georgia by the end of the year.

Turkey, China, Kazakhstan, Azerbaijan and Georgia on 30 November established a consortium for transportation of goods from China to Europe bypassing Russia.