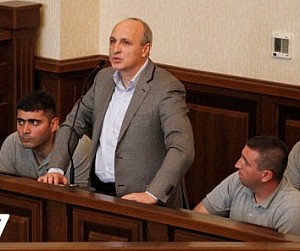 TBILISI, DFWatch–A former interior minister and close ally of ex-President Mikheil Saakashvili resigned as secretary general of the National Movement on Monday, the latest episode of a turbulent few months for the party that reformed Georgia over the course of a decade.

Head of the UNM’s political council Nika Melia announced Vano Merabishvili’s resignation after visiting the former strongman in Matrosov Prison, where he is serving a prison sentence for crimes while in office.

The National Movement regard him as a political prisoner.

“This doesn’t mean that he is going to join another party. He will issue a statement after the decision from the [International Court of Human Rights in] Strasbourg, where his case is underway. After the decision, he will make a political statement,” Melia said.

The strongman from Saakashvili’s cabinet was sentenced to four years and six months in jail by Tbilisi City Court in a case concerning the dispersal of a peaceful anti-government rally on May 26, 2011.

In October, 2014, he was sentenced to three years in jail for involvement in the cover-up of the murder of 28-year-old Sandro Girgvliani, a bank employee who was found dead in January, 2006, the night after a conflict at a restaurant in downtown Tbilisi where Merabishvili’s wife and several Interior Ministry officials were present.

He is also prohibited from holding public office for a year and six months.