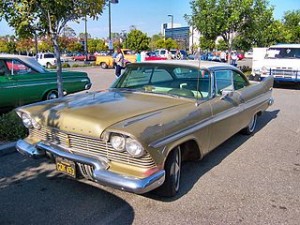 Most used cars sold at Georgian car markets are not as old as this 1957 Plymouth Belvedere. Photo: Morven.

TBILISI, DFWatch – Used cars has become Georgia’s most important export article, accounting for 21% of all exports in 2011. Second and third are ferroalloys and fertilizers.

The new report shows a significant increase in prices on food and soft drinks (1.5%) at the end of the year; also vegetables, melons, potatoes (9.6%), fish and milk, while prices decreased for sugar, sweets (4.3%) and bread products (0.9%).

For the whole year, the most significant changes are seen in the prices for transportation. They increased by 14.6 percent.

The most important trade partners are Turkey, Azerbaijan and Ukraine.

Georgia’s main export product is passenger cars, which made up 21% of all export in 2011. Second is ferroalloys with 11.8%, and nitrogenous fertilizers with 6.3%.

When it comes to import, petroleum and petroleum products are the number one with 12.8%, passenger cars number two with 7.0%, and petroleum gases and gaseous hydrocarbons had a 3.3% share.