TBILISI, DFWatch – America will be expecting to see a democratic transition of power in Georgia in the presidential election in 2013, Deputy Secretary of State William Burns said during a press briefing here in Tbilisi yesterday. 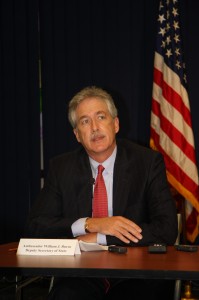 The most important thing is to have a level playing field in the coming elections, according to United States' Deputy Secretary of State, William Burns, as he met journalists in Tbilisi October 19. (Embassy photograph. Click to enlarge.)

Reactions have varied from the opposition seizing on the use of the phrase “transition of power” as a signal for regime change, to the government saying Burns doesn’t mean that the ruling National Movement Party won’t remain in government.

The briefing took place while Burns paid a working visit to Georgia and he has held meetings with both government officials and opposition politicians as well as representatives of the media.

The meetings are said to have centered around the country’s internal and foreign policy and made it clear that the US remains a partner of Georgia.

US will do its best to protect democratic institutions via the US-Georgia Strategic Partnership Commission and other existing contacts, William Burns said.

“We will do all we can to support Georgia’s emerging democratic institutions for development of a vibrant civil society, of free and independent media, of the rule of law based on judicial independence. We urge Georgia to conduct democratic reform, inclusively and transparently, and to strengthen accountability. We urge Georgia to reform the electoral code and the political environment to ensure free and fair elections over the next two years that result in a fully democratic transition of power in 2013,” Burns said according to a transcript provided afterwards.

Lasha Tugushi, editor in chief of the newspaper Rezonansi, claimed at the meeting that the part of the Georgian media is being controlled by the government in Georgia; political motivated decisions are made in the courts; and that business doesn’t dare finance political opposition parties. He also mentioned Georgian tycoon Bidzina Ivanishvili’s political activities and the fact that his Georgian citizenship was revoked.

“We believe it’s extremely important in any democracy and any society that’s building democratic institutions to focus on the importance of a level playing field, of a competitive political landscape; where all participants are treated equally and play according to the same rules,” William Burns responded.

He also mentioned that USA strictly supports the formation of democratic institutions and a competitive political sphere in Georgia.

“That’s much easier said than done sometimes, but it’s an extremely important goal. And that’s what we wish for Georgia, and that’s what we’ll continue to support here,” Burns answered.

He also mentioned that independent court and free media should form in the country.

“If you look around the world it’s hard to find any example of a society that’s successful in combating a problem that everyone recognizes and societies around the world – corruption; unless you have an independent media and independent judiciary to hold people to account. So it’s not an easy task it takes time but we believe that it’s extremely important to be honest and straightforward about the importance of building those institutions,” the Deputy Secretary of State said.

How possible is it public assumptions become real, that Mikheil Saakashvili will remain as Prime Minister in 2013 and what will be USA position in this case? – Answering this question which came from Interpressnews, William Burns said that in this regard it’s important to ensure free and just elections. 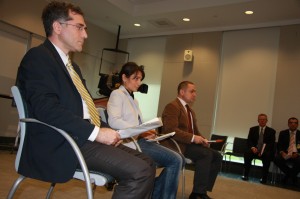 “Our focus in the long-term interest of Georgia is on the plain filed less on the players. And we believe, as I said in my opening comments, that it’s very important to ensure free and fair elections and open and transparent electoral process over the next couple of years, so that what Georgians see in 2013 – a very important moment for Georgia’s democracy – is a fully democratic transition of power. And so, that’s why it’s so important to focus on some of the issues that you and your colleague mentioned earlier on the importance of transparency and financing for the media and ensuring that everyone plays by the same rules, ensuring that the electoral code is strengthened, so that over the next couple of years you are able to ensure free and fair elections,” Burns said.

To opposition his speech is confirmation that USA supports government change in Georgia. But that this must happen democratic through elections.

But governments ‘transfer’ does not exclude the fact that the powers can be transferred to the same political groups and people, according to Akaki Minashvili, chairman of Parliament’s Foreign Affairs Committee and member of the ruling party.