US to fund Georgia’s participation in NATO Rapid Reaction Force

US to fund Georgia’s participation in NATO Rapid Reaction Force 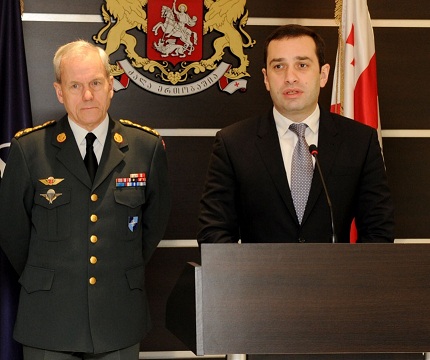 The NATO Military Committee visited Georgia on February 11 and 12. The delegation was chaired by Committee head Knud Bartels.

During the visit, the delegation met with the president, the prime minister and the defense minister of Georgia. The Committee also held a session to discuss Georgia’s security and defense transformation, participation in NATO operations and future cooperation.

After the meeting, there was a joint press conference with Defense Minister Alasania, head of the Joint Staff of Georgia’s armed forces, Vakhtang Kapanadze, and NATO’s Knud Bartels.

Alasania said Georgia will become part of the NATO Rapid Reaction Force from 2015, and a sponsor country has already been selected: It will be the United States.

“This means that our cooperation is on a new stage,” the minister remarked.

Georgia was expecting to receive a MAP (Membership Action Plan) in 2008, but didn’t. Now, members of the new government are hopeful about the upcoming NATO summit in Newport, Wales, later this year, and still expecting a MAP.

NATO officials are saying that Georgia is carrying out successful reforms and they are committed to the decision made in Bucharest in 2008, that Georgia will join NATO at some point in the future.

Batels said during Wednesday’s press conference that Georgia is a valuable partner for NATO and he supports the way Georgia’s armed forces are being reformed.

“I would like to highlight the impact of the transformation of the Armed Forces themselves has been a very positive development and I would further like to highlight the political dimensions as to the transparency and accountability relating to political dimensions of the Georgian Armed Forces,” he said. “Both those trends which are modern trends, both those very strong developments are highly appreciated by the allies.”

This is the first time the NATO Military Committee has held a session here in Georgia. The Committee is the highest military authority in NATO. Its main function is to present recommendations to the North-Atlantic Council on military policy and strategy and to give directions to the NATO strategic commanders. The Committee is staffed by the military representatives of NATO member countries.