US support for Georgia will be even stronger: Ambassador Kelly

US support for Georgia will be even stronger: Ambassador Kelly 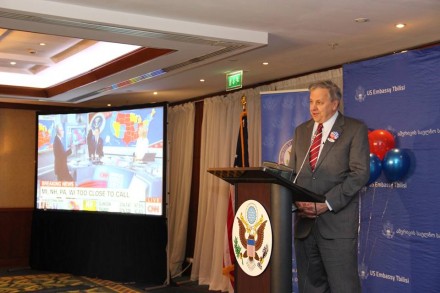 Tbilisi,DFWatch – Following the tense electoral night in the United States, Ian Kelly, US Ambassador to Georgia has emphasized that no matter who wins, US will remain strong alley to Georgia.

On Wednesday morning, at the US Election watch party Kelly once again highlighted that the United States will continue to support Georgia after the Presidential election in the country.

“What is happening right now in America is showing that there is a real desire for changes in United States. But what won’t change is the strength our relationship with Georgia.  I pledged to work with whatever transitions comes in the place in the next few days to ensure that our level of support for Georgia stays as high and even stronger than it is right now,” Kelly said.

Georgia’s Foreign Minister Mikheil Janelidze, who attended the event, said Georgia would get strong support from both, Republicans and Democrats.

“The result of the elections is American people’s choice and we are supporting their decision. The United States is our close strategic partner and we’ll celebrate 25 years of diplomatic relationships in the next year. During this period our relationships were based on mutual consideration and understanding,” Janelidze said.

On November 8 Donald J. Trump was elected as the 45th president of the United States. His stunning victory sent shockwaves around the world.

His triumph over Democrat opponent Hillary Clinton will end eight years of Democratic dominance of the White House.

The Republican nominee’s victory came down to a handful of key swing states, despite months of polling that favored Clinton.

In 2012, Donald Trump as an American real estate developer visited Georgia to build a luxury apartment complex in country’s Black Sea coastal city Batumi, but the construction of the Trump Tower never come into light.