US ambassador: Georgia has strong and competitive government

US ambassador: Georgia has strong and competitive government 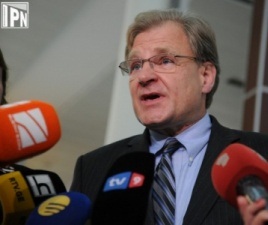 Norland said this during a meeting in parliament Thursday.

After meeting with the speaker of parliament and the leader of the opposition, he said that the main topics of conversation were current relations between Georgia and the US.

His main message was that cooperation with Georgia will continue regardless of which political bloc or politician is heading the country’s government.

Norland also met with the Foreign Affairs Committee of parliament. After the meeting he said Georgia should continue following its democratic path.

The ambassador said the progress Georgia has made should not be forgotten. Georgia has a strong government having sustainable election mandate, a competitive parliament, independent justice system and media, he added.