US Abrams tanks arrived in Georgia

US Abrams tanks arrived in Georgia 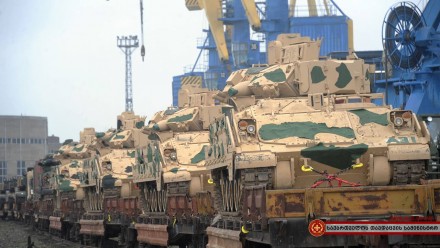 Tbilisi, DFWatch – American tanks and armored vehicles arrived for joint American–British–Georgian military exercises to be held between 11–25 May.

American heavy military equipment arrived to Georgia for a joint American–British–Georgian military exercise Noble Partner 2016 to be held between 11–25 May.

The equipment includes M1A2 Abrams tanks and Bradley Fighting Vehicles (BFV), which were shipped to the Poti port and transported to Vaziani Military Base located outside Tbilisi.

The American military equipment and soldiers travelled to Georgia across the Black Sea from Varna, Bulgaria.

The military exercise Noble Partner 2016 will be held in Georgia for the second time aiming at enhance the readiness of Georgia’s battalion to participate in the NATO Response Force (NRF) mechanism. The scenario of the exercise will include stability and attack and defence operations.

M1A2 Abrams tanks will be used in Georgia for the first time. The exercise will also involve Lockheed C-130 Hercules aircraft and other equipment.

A part of the American military equipment is expected to be displayed during the celebrations of Georgia’s Independence Day on 26 May, with participation of members of American and British military personnel, a day after the military exercise concludes.