Update: Restrictions on several roads due to snow

Update: Restrictions on several roads due to snow 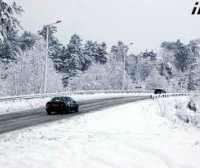 Traffic restrictions on the Akhaltsikhe-Ninotsminda road are now lifted. (Interpressnews.)

TBILISI, DFWatch–Traffic is still blocked along the road between Gudauri and Kobi in the north of Georgia due to danger of avalanche.

According to the Road Department, no vehicles are allowed through.

There are also the following restrictions on the Tkibuli-Ambrolauri road in western Georgia: Trailers, semi-trailers and vehicles with more than 30 seats are not allowed to drive on the 36km-72km section.

Traffic is moving freely from Tbilisi to the winter resort Gudauri.

Trailers, semi-trailers and cars with more than 30 seats are not allowed on the 91km-188km section of the Zugdidi-Jvari-Mestia-Lasdili road due to large amounts of snow. Traffic from 139km to 188km is allowed only by use of snow chains.