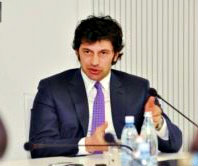 TBILISI, DFWatch–Former AC Milan player Kakhi Kaladze’s farewell match on May 31 is getting closer and people are already queuing to buy tickets.

Davit Mujiri, who coordinates the organizing of the match, on Wednesday held a press conference to give more details about the match.

According to the Italian magazine Corriere dello Sport, Kaká and Andrea Pirlo will also participate.

Samuel Eto’o was also ready to come, but he cannot manage due to a scheduled match by his club.

The other team or friends of Kakhi Kaladze is still in the process of staffing, but Fabio Cannavaro will play, also other well-known Georgian and foreign football players.

Carlo Ancelotti and Cesare Maldini will be the coach of Milan, while Alexandre Chivadze and Fatih Terim will coach the team of Kaladze’s friends.

The match will be held May 31 at Dinamo Arena, also known as the Boris Paichadze National Stadium, in Tbilisi, and the ticket prices vary from USD 3 to USD 6. The match will begin at 20:30.

Energy Minister Kakhi Kaladze left football in the end of 2011 to support current Prime Minister Bidzina Ivanishvili and his political coalition. Since then he has been planning to hold a farewell match, but it was rescheduled several times.