UNM pledges not to prosecute Ivanishvili after elections

UNM pledges not to prosecute Ivanishvili after elections 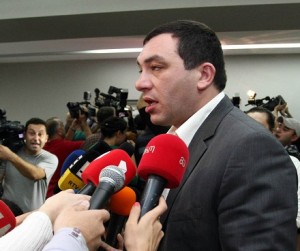 TBILISI, DFWatch–The National Movement will not prosecute Bidzina Ivanishvili and his supporters , Giga Bokeria, the party’s foreign affairs secretary said at a briefing on Wednesday.

UNM frontmen Giga Bokeria and Nika Melia claimed to have inside information that Ivanishvili summoned his supporters informally a few days ago and communicated his decision to leave Georgia if GD loses the parliamentary elections planned for October 8.

“We can see the panic and fear of [Ivanishvili’s] entourage due to potential failure in the elections,” Giga Bokeria said. “I want to call on Ivanishvili and his team not to leave the country after the defeat in the elections and just move into opposition. It is needed for normal European development. In normal European countries politicians don’t go to exile after losing elections.”

After the last parliamentary election, in 2012, many officials in the National Movement government left Georgia after being defeated at the ballot box. Party leader and lame duck president Mikheil Saakashvili facilitated the exodus of his former associates through a decree which gave ex-officials special permission to use diplomatic passports for one year after they had been fired.