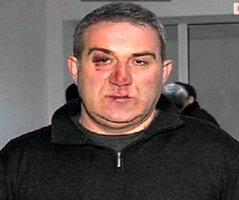 Nugzar Tsiklauri, an outspoken member of parliament for the National Movement Party, recalls that at about 3 am Monday morning he was approached by “up to seven or eight men” with three cars at the entrance to his apartment block when he was returning home.

“They attacked without pronouncing a word, tried to push me into the car…” Tsiklauri said. “It lasted for around two minutes. One of them twice struck me by electric shock.”

Neighbors were alerted to the noise and began shouting from their windows, after which the attackers soon retreated.

All of them wore black clothes and some of them were wielding “electric devices.”

Nugzar Tsiklauri was taken to the Ghudushauri clinic but soon released with minor injuries mostly to his face.

The UNM now urges the government to investigate the case as soon as possible.

“What happened at night means that the [government’s] fight against the opposition has entered a fundamentally new stage, where expressing critical views may affect a person’s physical existence,” said Davit Bakradze, former parliament speaker for Saakashvili’s UNM party, at a briefing at noon Monday.

Bakradze was the party’s presidential candidate in last year’s election.

He said that it is absolutely excluded that the attack could be anything else than political.

The attack on the MP was condemned by both Prime Minister Irakli Gharibashvili and Speaker of Parlaiment Davit Usupashvili.