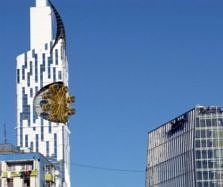 The tower was meant to be a technical university, an initiative of ex-president Mikheil Saakashvili, but the idea stranded.

The building was criticized during the previous government for not being suitable for education purposes. The 35-storey complex is the city’s tallest structure and has a small ferris wheel at the top.

After the change of power, the new government decided to sell the building. It will now most likely be used for a hotel.

As the auction ended Wednesday, there was only one bid, of about USD 25.4 million, made by the company Batumi Tower Ltd.

The company was registered in November 2014 and is one hundred percent owned by Celwood Investment Limited, a company registered in Central America.

Economy Minister Giorgi Kvirikashvili told journalists that at least USD 18 million will be invested and the plan is to make it into a hotel complex.

“We haven’t sold a university, but a building, which was subject of discussions,” he said, recalling claims that the construction wasn’t compatible with educational standards, which is why it was sold.

About 40 million laris was spent on the construction of Batumi Tower, which began in 2011. Ex-President Saakashvili opened the building in 2012.