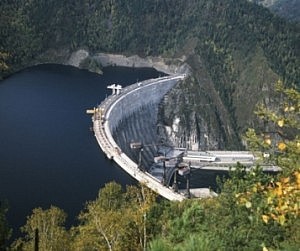 The dam is 271 meters tall and is located partially on the territory of breakaway Abkhazia.

According to the ministry, the move aims at promoting the country’s industrial heritage. There are also plans to build a museum and a sightseeing platforms at the dam.

The Agency of Cultural Heritage was quoted by Interpressnews as stating that it planned to hold a ceremony in Jvari, a town near Zugdidi, the administrative center of the Samegrelo-Zemo Svaneti region, where Energy Minister Kakhi Kaladze Culture Minister and Mikheil Giorgadze will sign the document granting culture heritage status.

The dam has the form of a sky arch and is bent in an arc shape. Engineers call it a two arched curve. The form increases the resistance to water pressure. The bedrock has the form of a saddle and is separated from the arc dam by perimeter stitches. This construction is considered unique.

Enguri hydro power station is built on the river Enguri, which is the most powerful of its kind in South Caucasus, and is partially located on the territory of breakaway Abkhazia. The dam itself is on Georgian-controlled territory, while the electric station is on the Abkhazian side. The two sides manage the installation together and share the electricity that is generated. Approximately 1.2 billion kWh has been distributed to Abkhazia annually without payment.

The construction of Enguri hydro power station started in 1961. In 1978, it became operational and in 1987 it was completed.