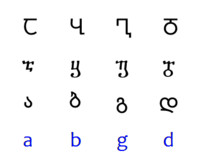 TBILISI, DFWatch–The Georgian alphabet has been recognized by UNESCO as part of humanity’s cultural heritage.

The three alphabets are called Mrgvlovani, Nuskhuri and Mkhedruli and all remain in use today. They are practised by the great majority of the Georgian population as an important part of their cultural identity and self-expression.

The alphabets are used for Georgian language, which is spoken by more than 3.7 million people, and to some degree for Megrelian and Svan, two other languages in the Kartvelian language family which do not yet have a written form.

Mkhedruli is the alphabet which is taught in schools and which is seen in news, literature and the public sphere. The other two alphabets, Mrgvlovani and Nuskhuri, are used and taught predominantly within the Georgian Orthodox Church.

“Their ongoing use in a cultural sense also gives communities a feeling of continuity,” UNESCO writes.

Georgian scripts were given the national status as cultural heritage in Georgia in 2015.