Under-staffing indicated as cause of miner’s death in Chiatura

Under-staffing indicated as cause of miner’s death in Chiatura 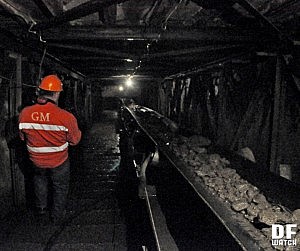 TBILISI, DFWatch–A 53-year-old man died in an accident in a manganese mine in Chiatura on Saturday.

Paata Ghavtadze died from injuries while leaning out of the locomotive he was driving in the poorly-lit Itkhvisi mine in the mining town in the Imereti region in central Georgia.

Preliminary reports indicate that he was driving a locomotive loaded with ore when he leaned out to check whether the track was clear and hit his head on empty wagons parked on the other side of the track.

Drivers do not have assistants to help them drive in the dark tunnels of the Chiatura mines. This makes it difficult for the drivers to see whether there is something on the track.

“An investigation is underway, but likely it was the fault of the victim. He violated safety rules,” Giga Khvichia, technical security manager at the U.S.-owned company Georgian Manganese, told Guria News.

But he emphasized that there were no eyewitnesses to the incident.

Representatives of the trade union claim the management of Georgian Manganese keep reducing staff in the mines, a policy which affects the drivers too.

Guria News also reported an incident a few days ago in the Tsereteli mine in Chiatura, where one mine worker was injured. The accident also happened on the tracks and involved a locomotive.

Paata Ghavtadze leaves behind a wife and two children.