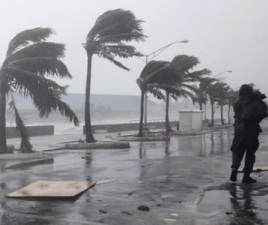 The coastal city Batumi was damaged by a storm in March, 2013. (Interpressnews.)

“Georgia is often challenged by the risk of natural disasters, which seriously jeopardizes the country’s economy, as well as our citizens,” Environment Minister Khatuna Gogolashvili said on Thursday.

“International assistance and advice in issues to reduce catastrophe risks is really good.”

A UN special mission is now studying the situation in Georgia accompanied by Georgian and international experts.

For the next two weeks, the mission will look at Georgia’s legislation and mechanisms for managing catastrophe risks and map out in what areas there is a need for improvement.

After holding consultations, the government will prepare an action plan about building capacity to reduce disaster risks, to be presented by the end of 2014.