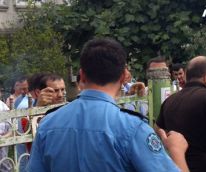 This is some of the content of a new report drawn up by the influential 18 member expert panel.

Looking back on Georgia’s human rights record since 2006, the panel finds many signs of progress, but asks to speed up the cleanup in violations committed by authorities, although there should not be created an impression of political retribution. 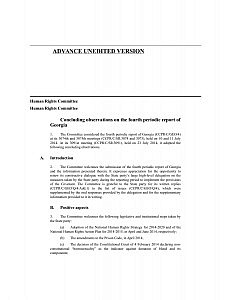 One of the cases it asks to expedite all investigations into, is the violent dispersal of an anti-government demonstration on November 7, 2007. Georgia’s chief prosecutor last Monday charged former President Mikheil Saakashvili and four of his associates in connection with that same case.

But the UN’s experts argue for the need to hold ‘persons in command’ to account, particularly when it comes to people who disappeared during and immediately after the 2008 war. One such case is forest ranger Davit Tsindeliani, who disappeared in August 2008 and is believed to have been killed.

It urges Georgia to “ensure that all allegations of enforced disappearances, indiscriminate and disproportionate attacks against civilian population and other protected persons, unlawful detention, torture and inhuman treatment, extensive destruction and appropriation of property are effectively, independently and impartially investiga ted” and that perpetrators, “including, in particular, persons in positions of command, are prosecuted and sanctioned in a manner commensurate with the gravity of the committed acts.”

Victims must be provided with effective remedies, including compensation, the expert group writes.

Apart from the November 7, 2007, violence, the report also lists many other cases of abuse in recent years, like the violence against inmates at Ksani prison, and asks Georgia to go through with plans to create a separate body to expedite investigations.

The 18 member body, which should not be confused with the political body called the UN Human Rights Council, has as its main function to review how countries comply with the International Covenant on Civil and Political Rights.

The latest report is the body’s answer to a report submitted by Georgia in June 2012; a pivotal period in recent Georgian history which the UN body unsurprisingly dedicates much of its attention to. Opposition groups, which for years had tried to depose Saakashvili through mass protests, that year had managed to come together in a coalition aimed at removing the government through the ballot box, which it succeeded in doing, but was met with harsh measures by the National Movement government.

The committee urges Georgia to pursue investigations into violations committed ahead of the 2012 parliamentary election, when there was a country-wide crackdown on opposition groups. It is concerned about the tens of thousands of complaints lodged with the Prosecutor’s Office for such incidents including unfair trial, torture and ill-treatment and illegal expropriation, and encourages the government to pursue investigations into past abuses, but make sure that there is not created the appearance of political retribution.

The Georgian government ‘should do everything in its power to provide victims of violations with effective remedies,’ the body writes.

One of the bright spots, as the committee sees it, is parliament’s passing of an anti-discrimination law in May. The law attracted the ire of Georgian conservatives, but was ultimately passed without removing passages that explicitly offered protection for gays, lesbians and other sexual minorities.

In its report, the committee concludes that discrimination on the basis of sexual orientation, gender identity, religion or for other reasons is quite prevalent in Georgia. The resources currently made available for the Public Defender’s Office are insufficient to have an effective enforcement of the anti-discrimination law, the committee thinks.

Moreover, there are not enough sanctions to discourage and prevent discrimination, it argues.

“The Committee is concerned about discrimination and social stigma, hate speech and acts of violence against lesbian, gay, bisexual and transgender (LGBT) persons and violation of their rights to freedom of expression and assembly,” the committee writes in its newly published report, concluding that people in Georgia are often discriminated on the basis of sexual orientation and gender identity.

The anti-discrimination law, which was adopted in May, includes gender identity and sexual orientation that caused a massive protest by conservatives, who claim that it is what they call ‘propaganda for homosexuality’. They demand that the offending phrases are removed from the law.

The powerful Georgian Church also put pressure on the government not to pass the law without removing the parts about sexual identity, but the Georgian Dream coalition did not compromise, and passed the law.

The committee recommends: “the State party should take effective measures to combat any form of social stigmatization of homosexuality, bisexuality or transexuality, or hate speech, discrimination or violence against persons based on their sexual orientation or gender identity.”

Also when it comes to discrimination on the basis of religion, the Human Rights Committee has points of concern. It thinks such discrimination is a pressing problem in Georgia, and notes “cases of religious intolerance, including harassment and verbal and physical assault against persons belonging to religious minorities, in particular Jehovah’s Witnesses, Muslims and members of other non-traditional religious minorities, as well as interference in their worship activities and vandalism.”

The committee refers to the cases of pressure on Muslims in three Georgian villages in 2013, where they were not allowed to pray or build a prayer house by locals. For the moment, local Christians and Muslims are not in open conflict, but some tension remains, and some places Muslims still don’t have a place to pray.

Also, there were several cases of discrimination against Jehovah’s Witnesses. One of the prayer houses called kingdom hall was shot at several times, the car of one of the followers was damaged, and dozens of witnesses complained to the ombudsman about verbal abuse.

The human rights committee thinks the reason for the low level of involvement of ethnic minorities in the social and political life of Georgia is a lack of knowledge of the Georgian language. This is especially a problem in regions away from the capital, though the situation is gradually improving, as a new generation is offered to learn Georgian language during their first year at university and then start their studies in Georgian. That’s why young representatives of ethnic minority are more integrated.

Another problem pointed out in the report is that local authorities are obligated to answer everyone in the Georgian language, which puts minorities at a disadvantage. To improve the situation, the committee recommends that Georgia considers allowing the use of minority languages in local government.

The committee is also concerned about the lack of specific programmes aimed at the social and economic integration of Roma people.

Part of the report deals with family violence and violence against women, as well as the lack of female representation in politics and in the workplace, and asks Georgia to take measures.

This is the fourth periodic report the UN Human Rights Committee writes about Georgia. The last one came in 2006.

All states are obliged to provide the information necessary to carry out the monitoring, after which the committee discusses the data and  addresses its concerns and recommendations to the state party.