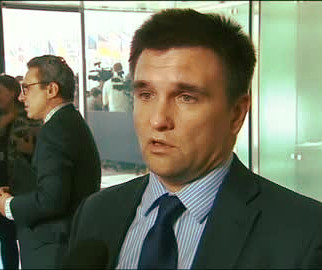 TBILISI, DFWatch–Ukraine intends to sign a free trade pact with the EU without further postponement, despite warnings from Russia, Ukrainian Foreign Minister Pavlo Klimkin said in Brussels on Monday.

Ukraine’s foreign minister met with the EU Commissioner for trade Cecilia Malmstroem and Russian Economy Minister Alexei Ulyukayev to discuss the “deep and comprehensive free trade agreement”, a part of an association agreement Ukraine signed with the EU last year.

Klimkin claimed Russia is trying to use the talks to obstruct the pact, but EU Observer quotes him saying January 1 is the final deadline for its enforcement.

“It’s an ultimate decision taken jointly by Ukraine and by the European Commission,” he said, “There’s no chance to influence this by the Russian side or any other side … there’s no chance of changing the agreement”.

Less than a month ago, Russia imposed an embargo on goods from Albania, Montenegro, Iceland and Liechtenstein. Russian Prime Minister Dmitry Medvedev explained that the embargo would also include Ukraine if it signs the economic part of its Association Agreement with the EU.

The Russian embargo concerns countries that joined the EU sanctions against Russia, but even though Georgia was among those countries, it was not subject to an embargo. However, a few days before the embargo was announced, Russia’s consumer safety agency Rospotrebnadzor issued a statement warning of the poor quality of several brands of Georgian wine. This was seen as a signal of a possible embargo on Georgian products, like what was introduced in 2006 following the arrest in Tbilisi of four Russian diplomats on espionage charges.

Klimkin said there’s “no kind of proof” that Russia’s stated concerns had any substance.

“If Russia is ready to take political decisions about prohibition of Ukrainian exports, then what kind of substance are we talking about?”, EU Observer quotes him saying.

Ukrainian agricultural exports to Russia already fell by 76 percent, to $175 million, in the first seven months of the year compared to the same period in 2014 due to the politics of the crisis.