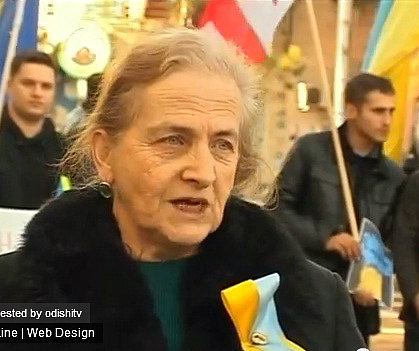 People gathered in Zugdidi to show support for those Ukrainians who are struggling for closer integration with Europe. (Photo: Odishi.)

TBILISI, DFWatch–Tens of people Saturday gathered in Zugdidi, a town in western Georgia’s Samegrelo region, to express solidarity with people in Ukraine.

The crowd brought with them Ukrainian flags and Georgian flags and posters saying Freedom to Ukraine, Victory is Near, and a video was posted from the event.

Participants say what is happening in Ukraine right now is important for Georgia and they support the Ukrainian people’s European choice.

They also condemn the actions of the government there and think that if Ukraine becomes a member of the EU, it will be easier for Georgia to become member too.

Youth from neighboring towns also joined the rally in Zugdidi.

A Ukraine solidarity rally was also held in Akhaltsikhe, a town in the region Samtskhe-Javakheti in southern Georgia. ‘I love the Ukrainian People’, ‘Georgian and Ukrainian people in European family’ was written on the posters.

There have been several support rallies for Ukraine in Tbilisi in the last week and today there is planned another one at Roses Square. People plan to gather there and drive down Rustaveli Avenue waving Ukrainian flags from their cars and make a stop at the old parliament building close to Freedom Square.