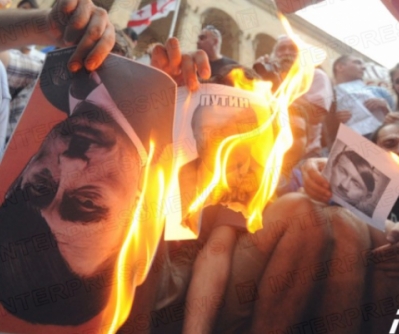 TBILISI, DFWatch–People demonstrated in front of the old parliament building in Tbilisi Friday in support of Ukraine and against Russian aggression.

Demonstrators called on the international community to make more efforts to help Ukraine in the ongoing crisis.

Participants carried posters with anti-Russian slogans and Ukrainian flags. They burnt photos of Russian President Vladimir Putin and at the end sang the Ukrainian national anthem.

“Stop Russia – Save Europe” one of the posters read. One of the participants said Russia is conducting the same policy in Ukraine as in Georgia during the war in August 2008 and is continuing the occupation of independent and sovereign states.

Some also called on the Georgian government to support Ukraine more forcefully.