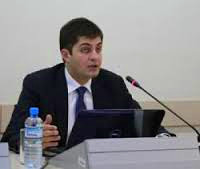 TBILISI, DFWatch–The new government in Ukraine has detained the deputy chief prosecutor and deputy head of the investigation service on suspicion of corruption.

Ukrainian media report that the General Prosecutor’s Office and Ukraine’s security service conducted a joint operation, and later reported it to the president.

Current Deputy Chief Prosecutor and former Georgian government official Davit Sakvarelidze was present at a meeting with Ukraine’s President Petro Poroshenko, and later wrote on his Facebook that the detainees covered up a corrupt scheme involving the appropriation of money from a sand mining business.

Police seized more than half million US dollars during a search of offices and houses. The seizure included jewelry, securities and unregistered weapons.

Poroshenko said the prosecutors will no longer be untouchable and there will be a ‘zero tolerance’ policy toward them.

Ukraine’s new government selected a number of officials from Georgia’s previous government, including its leader Mikheil Saakashvili, who is now governor of Odessa, but is wanted in his home country.

When Saakashvili and his National Movement came to power, one of the first reforms they conducted was to eliminate high level of corruption, mostly by sacking personnel on every level, replacing them with completely new staff. The government after the Rose Revolution in 2003 arrested many so-called thieves-in-law, or mafia, and other criminals and the government often used the term ‘zero tolerance’ about the war on crime.

The opposition against Saakashvili accused the National Movement of being involved in its own high level corruption, a criticism that gained ground later in his presidency as more businesses brought complaints against the then government.