UK ambassador accused of being ‘neocolonial’

UK ambassador accused of being ‘neocolonial’ 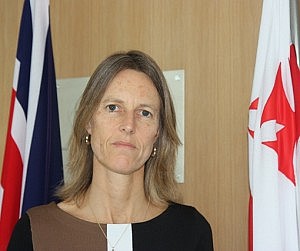 TBILISI, DFWatch–A Georgian politician lashed out at a British diplomat on Facebook Tuesday, accusing her of being ‘neocolonial’.

UK Ambassador to Georgia Alexandra Hall Hall’s remarks at a conference in Tbilisi, organized by McCain Institute, were not taken lightly by French-Georgian politician Salome Zourabichvili, a veteran diplomat who was the first foreign minister of the South Caucasus nation after the 2003 Rose Revolution.

At the conference, Ambassador Hall Hall said that Georgia is a leader in the region and should be proud, however considering what level Georgia wants to achieve during its development, there are challenges, particularly ‘personalized politics.’

According to Georgian news agencies, she said there are ‘personal attacks’ on the current president, Margvelashvili, and his predecessor, Saakashvili, which results in a decline of institutions.

She continued saying that there have been many negative incidents affecting political parties as well as between political persons, and that it is necessary to be more cautious.

Georgian news agencies reported that Hall Hall said she feels that some people believe that if they do things and it is not greeted by an appropriate reaction then it is justified to commit those things. She says there is an expression in Britain for such cases, to ‘pass small exam’, and considering recent events in Georgia, it has failed to pass the small exams. As an example, she mentioned that authorities allegedly have been using preliminary detention as a tool against opponents.

She further criticized the general attitudes of the public, like when foreigners complain about how drivers are driving in streets or how people are littering.

On the positive side, she mentioned that Georgia has successfully conducted three elections in a row and how every one was an improvement. Georgia is developing in the right direction and reports by Freedom House is a proof of that.

Salome Zourabichvili, a Georgia diplomat who wanted to run in the most recent election, but was rejected due to her dual citizenship, responded to Hall Hall’s statements on her Facebook page.

“My 35 years of experience in diplomacy and international arena gives me right to say that this ambassador doesn’t know her place and codes of conduct, or what is worse she thinks that if she is in a small country she has every kinds of rights,” she wrote.

Zourabichvili continued that she has less interest in who the ambassador was criticizing, but she believes that no-one has given ambassadors the right to judge.

She believes that even though there are complaints and Europeans have a right to claim so, it must be said that many European countries do not actually fulfill European principles and codes.

“Like UK rejecting to accept refugees and finally when there wasn’t left other options they forcefully agree on accepting the very minimum number of people,” she wrote.

“All nations are equal, all deserve respect and first of all from the ambassador represented there.”