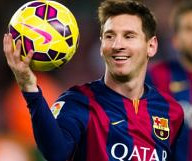 Lionel Messi was declared best player of the match. (Interpressnews.)

TBILISI, DFWatch–Barcelona won last night’s UEFA Super Cup 5-4 against Sevilla, which was played at Dinamo Arena in Tbilisi. It was the team’s fifth Super Cup win in a row.

Sevilla scored the first goal, but Barcelona scored three goals, ending the first half 3-1. The second half ended 4-4, and the teams had to play additional time. In the 115th minute, Pedro Rodriguez Barcelona’s fifth goal.

The supporters of Barcelona greatly outnumbered Sevilla fans, to such an extent that it almost seemed like Barcelona was playing at home. When Sevilla scored it sometimes got negative reactions from the audience.

Lionel Messi was named best player. He scored two goals, in the seventh and sixteenth minute.

UEFA President Michel Platini handed the cup to Barcelona, after both teams were given medals. Members of the Georgian government were present during the match and the awarding giving ceremony and personally congratulating the players. Among them were Prime Minister Irakli Garibashvili, Mayor of Tbilisi Davit Narmania and Speaker of Parliament Davit Usupashvili.