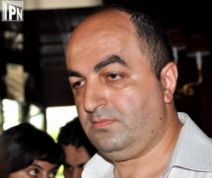 Ucha Nanuashvili was Friday confirmed as the new ombudsman, or public defender, of Georgia. (IPN.)

The 38 year old lawyer has more than 15 years of experience as a human rights worker and is currently director of the non-governmental organization Human Rights Center.

Mr Nanuashvili’s appointment for a five year term came after weeks of debate.

After the final debate Friday, 82 MPs voted for him, while 18 were against.

Ucha Nanuashvili, who foundeed Human Rights Center, has worked in number of local and international human rights organizations and has also been chair of Human Rights House Tbilisi since 2010.

After the prisoner abuse scandal in September, President Saakashvili appointed then public defender Giorgi Tughushi as new prison minister, after the previous minister left as a consequence of failed prison reforms. Since then, the post of ombudsman has been vacant.

Two assumed frontrunners, Tamar Gurchiani, a human rights activist, and Dimitry Lortkipanidze, a former member of parliament who now works with human rights, did not make it to the final stage.

The candidates – seven all in all – have met for debates many times in recent weeks, and laid out their goals and plans. A certain time it seemed that the main issue was going to be the rights of minorities, especially sexual minorities, an issue on which Tamar Gurchiani emerged strongest, but she failed to garner enough support among Georgian Dream’s delegates in parliament.

Gurchiani was the only candidate supported by both civil society and the minority in parliament; the National Movement party. Dimitry Lortkipanidze was criticized for allegedly making homophobic statements, but had strong support from prisoners and their families.

In order to avoid picking one of those candidates, Georgian Dream at first picked Nina Khatiskatsi as its candidate. She formerly worked in Transparency International Georgia, but was fired shortly before the election, allegedly for political reasons. Her husband campaigned for Georgian Dream, which was subject to many countermeasures by authorities at the time.

Khatiskatsi then withdrew her candidacy in favor of Gurchiani, but when she discovered that Georgian Dream didn’t support Gurchiani, she threw herself back into the race, a decision for which she was criticized by some.

Later Khatiskatsi’s husband was appointed to an official position in one of the regions, which made her candidacy problematic.

Out of concern for a possible conflict of interest if Khatiskatsi was elected, Georgian Dream looked for another more or less neutral candidate, and chose Ucha Nanuashvili.

The National Movement accused Nanuashvili of having been a Georgian Dream activist during the election campaign, which he denied.

He explained that he has been cooperating with public movement Georgian Dream, but not with the party. He was involved in the process of preparing a document about human rights.

The National Movement also criticized Nanuashvili for a campaign the Human Rights Center ran called ‘the Sorry Campaign’, with a general theme of forgiving, and for saying that Georgia started the war in 2008.

No other candidates were presented at Friday’s session in parliament.

Ucha Nanuashvili says his main goal is to turn the ombudsman’s office into a more active body and not wait for complaints to be filed with the office.

He says the ombudsman should do more than just preparing annual reports and recommendations; the office should be more transparent and there should be a permanent consultation council with human rights activists.

Protection and tolerance for the rights of minorities, women and children will be a priority for him.

He thinks it is important to be actively involved in defending the rights of people in conflict regions.