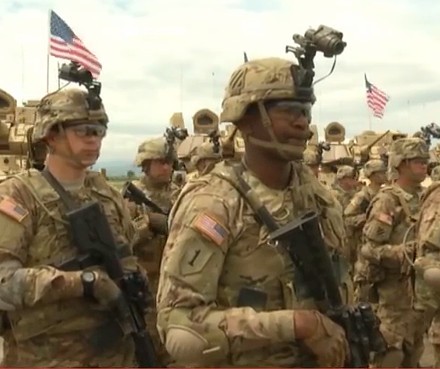 Having U.S. soldiers present will be a new and unusual detail in the Independence Day celebrations. The government decided to remove the military parade element for three years in a row.

New Defense Minister Tina Khidasheli said on Sunday after meeting U.S. General-Lieutenant Frederick (Ben) Hodges that having American soldiers alongside Georgian ones on Freedom Square on Independence Day is a ‘sign and proof to our cooperation, friendship, partnership and support’ from the U.S.

Earlier on Saturday, President Giorgi Margvelashvili awarded Hodges with the Golden Fleece Order for the ‘exceptional support expressed’ towards Georgia.

The U.S. soldiers are in Georgia to take part in the joint Georgian-American ‘Noble Partner’ exercise in which about 600 soldiers are participating. https://www.youtube.com/watch?v=5JjF386xS_w

Khidasheli said after meeting Hodges that the joint U.S.-Georgia exercise might continue in the future.

The government has allocated more than 1.5 million laris (USD 600,500) for the celebration this year, money which comes from the Reserve Fund. The financing will be used for several events and is distributed as follows: 625,000 laris to the Ministry of Culture, 385,000 laris to the Government Administration, 224,000 to the Public Broadcaster, 50,000 to the Sports and Youth Affairs Ministry and 295,000 laris to Tbilisi City Hall.