U.S. Ambassador to Georgia is confident in NDI’s polling methods

U.S. Ambassador to Georgia is confident in NDI’s polling methods 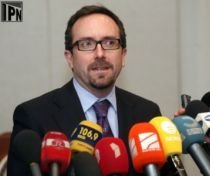 U.S. Ambassador to Georgia John Bass says NDI's and IRI's polls are done by legitimate methodology and it's important to distinguish between the results themselves and they way the results are portrayed.

TBILISI, DFWatch – The U.S. Embassy to Georgia has expressed its confidence in surveys done by the National Democratic Institute and the International Republican Institute and says the polls are conducted professionally and are based on legitimate methodology.

The embassy’s statement is a response to an open letter sent to the Ambassador John Bass by the opposition coalition Georgian Dream, which was set up by Bidzina Ivanishvili, considered the main competitor to the government.

Georgian Dream appealed to US diplomats, asking that NDI and IRI stop measuring support for political parties until after the parliamentary election.

“Due to a number of reasons, this project doesn’t fulfill its function, but has become counterproductive during the formation of a competitive political environment, democracy and citizens making political choice. On the one hand, the methodology and format of conducting and publishing results of this survey and on the other hand, the ruling party manipulating with these results through national channels has led to mistrust by an important part of society towards the surveys,” the letter says.

The last NDI survey showed 47% support for the ruling National Movement party and only 10% for Georgian Dream. Last November, a poll by the IRI, which is met with similar distrust, showed 42 to 18 per cent, respectively, but ISSA, a polling company not working for either of the American political parties, found that there was almost a neck and neck race with Saakashvili’s party leading 36 to 32.

The U.S. embassy in its response reinforces its trust in the NDI as an organizer of opinion polls:

“The National Democratic Institute (NDI) is a nonprofit, nonpartisan organization that has been working to strengthen democratic institutions and practices around the world, including in Georgia, for almost 20 years. NDI promotes greater citizen participation and government accountability, and its programs are funded by a variety of sources, including the United States Government. The NDI poll results which were released on March 23 were not funded by the U.S. government.”

“NDI is doing important work in Georgia, including through its research and polling, which help identify the views of Georgia’s citizens. One of the most useful aspects of this type of polling is to measure which issues are of greatest concern to the public, helping political parties to become more responsive to those concerns. We are confident that NDI’s polls – and those of the International Republican Institute — are conducted professionally and based on legitimate methodology. It is important to differentiate between the information and insights provided by this research and the manner in which individual media outlets, political parties and other organizations subsequently choose to highlight specific aspects of the poll results.”