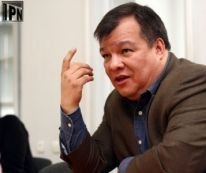 No comment. Luis Navarro, NDI's Georgia man, refuses to comment on why the poll didn't have a presidential candidate from the ruling party compared against opposition candidates. "I don’t want to comment on that part of the survey which we didn’t publish," he says. (Photo: Interpressnews.)

NDI has been in hot waters locally over the poll, but Friday received moral support from the U.S. Ambassador John Bass. NDI’s Georgia head Luis Navarro returned to opposition-friendly TV Kavkazia the same day and continued defending his organization against criticism, and also gave an interview to Interpressnews.

One of the things NDI has been suspected of, is selecting questions for the survey in a way that suits the government of President Mikheil Saakashvili. The poll did according to Interpressnews not gage people’s opinions about several important things; first, whether people want to see Saakashvili continuing as prime minister, and second, who they want to see take over as president. On the last question, NDI polled opposition candidates against each other, but did not name a candidate for the ruling party.

A poll done by a company not affiliated with either of the American parties, called Institute for Social Studies and Analysis (ISSA) did a survey in November 2011, which showed that the opposition Bidzina Ivanishvili polled well on both these issues the NDI left out. They showed that people generally would like to see Saakashvili continue as prime minister, but that if given an alternative to having him stay on, they would rather have Ivanishvili in the post. The ISSA also found that if Ivanishvili were a candidate for president, he would win 32 to 13 against Gigi Ugulava, Tbilisi Mayor and likely National Movement candidate. However, a poll done in the same period by the International Republican Institute showed the National Movement candidate winning against Ivanishvili 32 to 27 per cent, no matter who gets nominated.

Navarro explained to the Interpressnews’s reporter, Manada Mchedlishvili, that the organization has asked about Saakashvili becoming prime minister in a previous poll, and “quite frankly we thought that this time other issues were more interesting.” But he offered to discuss whether to poll the issue again at a later stage. The NDI are to have two more poll before the election for parliament in October.

Addressing the issue of why a ruling party candidate was left out of the poll about presidential candidates, Navarro answered simply that he didn’t want to comment on that part of the survey which the NDI didn’t publish. “We didn’t publish results about what people think regarding certain election issues. We didn’t publish these results because – before, when we didn’t publish surveys at all, emphasis was made only on the ratings. Since 2010, we started to publish important issues for the population. In addition, there is a part which is about political competition, and that is not public,” he told the news agency.

Another point of criticism is the high percentage of people not responding, between 30 and 40 per cent, which has led some commentators to question the results. Again, Navarro answered that he didn’t want to comment on issues on which the NDI didn’t go public with their poll. He explained that the reason NDI only publishes part of their polls in Georgia has to do with what goal a specific grant serves.

Among the issues NDI has not done any polls about is the level of trust in Georgian society towards themselves, but Navarro doesn’t rule out that someone might look into that in the future. However, he thinks it’s a diversion to spend so much attention on who did one particular poll. “I think if people decide to focus on one particular organization or political player in the survey process, that won’t serve the interests of Georgian citizens,” he said.