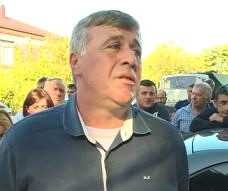 TBILISI, DFWatch–Two National Movement activists have been charged with violence and threats against members of the governing Georgian Dream party at a campaign event in western Georgia a few days ago.

The incident happened on October 1 in Didinedzi a village near Zugdidi in the Samegrelo region.

Three members of the ruling Georgian Dream’s youth wing were beaten. They were hospitalized, two of them had head concussion. GD members claim they were provoked by a group of UNM activists who were under the influence of alcohol and beat them.

The local UNM office told a different story: that October 1, Papuna Kukava, head of the party’s office in Didinedzi, was driving with his family, when about 20 members of GD’s youth wing blocked the road and attempted to provoke them.

The Public Defender questioned people involved in the incident and one of the injured recalled that GD youth activists were distributing flyers. They saw a car stopped and wanted to hand out the flyers, but they were told that on October 8, the era of GD government would end.

One of the victims told the ombudsman that the driver hit him in his head with a stone, and he fainted.

The statement of the UNM reads that when the GD youth wing members blocked the road for Kukava and his family. He asked to free the road, but was insulted. Neighbors came out, and there was a fight. During the fight, the car was damaged too. UNM called it ‘a well planned provocation’.