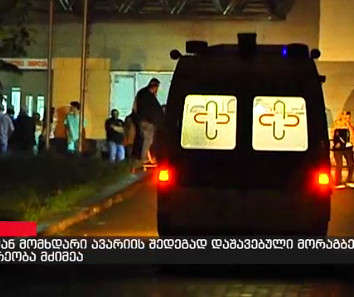 TBILISI, DFWatch–Two Georgian rugby players are among the injured after a deadly car crash in western Georgia in which three people died and four were injured.

The accident happened last night when a BMW and a Nissan Tiida crashed on the Kutaisi-Samtredia bypass road.

A young married couple and their child were killed, as was another person traveling in the car with the couple.

The injured were brought to hospital. Among them are rugby players Giorgi Lominadze and Merab Kvirikashvili, who were travelling with their wives in the other car.

Doctor Davit Tsulaia told Rustavi 2 that Kvirikashvili is conscious. His lungs are damaged, but his condition is not life-threatening. Lominadze has femoral and tibial fracture, traumatic shock and closed craniocerebral trauma. He has lost a lot of blood.

Kvirikashvili’s wife is in serious condition and was transferred from Samtredia to Kutaisi hospital. She is on life support in the intensive care unit. Lominadze’s wife is in a referral hospital in a critical condition.

Member of Tbilisi City Council Shalva Obgaidze writes on his Facebook page that a section of the Kutaisi-Samtredia road is ‘particularly dangerous’, where the one-way traffic unexpectedly ends and two-way traffic starts.  He also published an accompanying photo, showing the road section in question.

“A driver can’t manage to suddenly slow down, and cars traveling at high speed come toward each other. This is a very dangerous area which needs quick intervention. Otherwise the number of accidents will increase.”

As DFWatch previously reported, according to the latest data, 284 people died in car accidents during the six months from January to June of 2015, while 4,130 were injured.