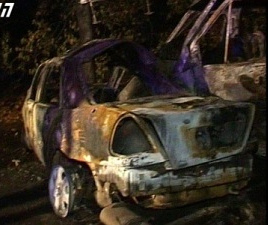 First, a Mercedes car and a minibus crashed in Grigoleti, a small town on the Black Sea. The Mercedes caught fire and exploded, killing everyone inside, including two children.

The minibus had three passengers.

According to emergency service, the Mercedes was a gasoline car that had been converted to run on compressed natural gas (CNG) – a cost-saving modification common in Georgia.

Police and ambulance were dispatched from Poti and arrived at the scene of the accident. When the ambulance was bringing one of the injured to hospital, it crashed into a police pick-up truck. The injured woman died, while three police officers and three emergency service employees were injured and taken to hospital. Several other vehicles were also damaged in the second crash, but none of the drivers were injured.

Four people remain in Imereti regional hospital: the driver of the minibus, who may leave hospital today, and three police officers, who are in a serious condition.

An investigation has been launched about violation of traffic rules.