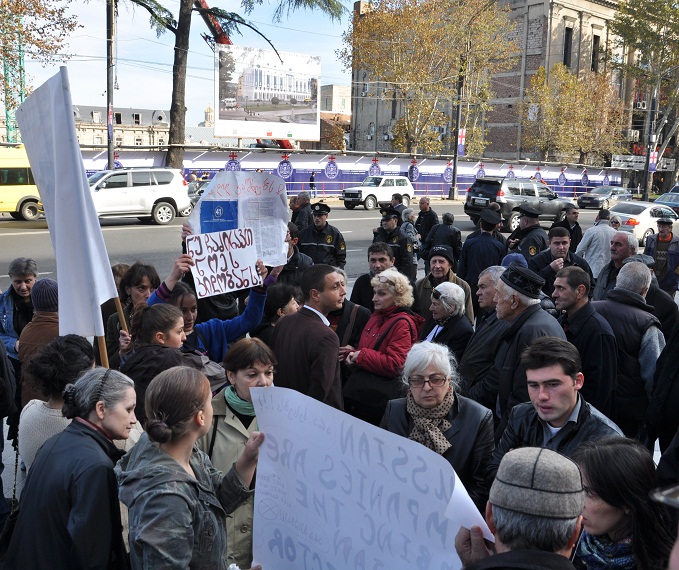 TBILISI, DFWatch–Two separate demonstrations went on on the street outside during the inauguration of Giorgi Margvelashvili in the yard of the old parliament building in Tbilisi on Sunday.

Labor party leader Shalva Natelashvili rallied supporters and said that the election was a fraud and that the voting-papers were fake and demanded a new parliamentary election.

He ended the rally soon, saying that delegations from 53 countries had arrived and it was not ‘reasonable’ to continue the rally.

Natelashvili, who before the election had threatened to organize rallies if he was not elected, said he thinks Margvelashvili is not a legitimate president. He mobilized a small crowd that held the Labor party banner and posters saying “fake president”, “Margvela go home”.

Shortly after the rally, another group of protesters came to the same spot to protest against the construction of large hydro power dams in the country.

The brief rally was organized by environmental activists and had as motto “No to large dams”. Demonstrators came to show their objection against the construction of large dams, which will cause damage to the environment.

A gigantic Soviet era hydro power dam in Khudoni in the Svaneti region was initially put on hold by the Ivanishvili government, but is now being implemented.