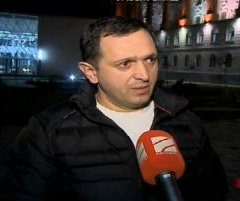 TBILISI, DFWatch–A former chief prosecutor and a deputy head of the National Forensic Bureau were Wednesday charged with involvement in the murder of PM Zurab Zhvania in 2005.

The charges are that he and Rostom Lazaria were ordered to investigate when Zurab Zhvania and his friend Raul Usupov were found dead in an apartment in Tbilisi on February 3, 2005. The new statement says that Gvaramia and Lazaria falsified the testimony of Mikheil Dzadzamia, a member of Zhvania’s personal guard detail, and falsified documents in order to support the things described in the testimony.

Tbilisi City Court on Wednesday set a 3,000 laris (about USD 1,500) bail for each of accused and scheduled a pre-trial hearing for March 26. The Prosecutor’s Office wanted the court to place them in pre-trial detention.

Gvaramia said during the hearing that Prosecutor’s Office wants to make a fuss by detaining him in order to hide the fact that they are unable to investigate the Zhvania case. He also said that none of the  charges are true and the Prosecutor’s Office doesn’t have proper evidence to prove that he falsified Dzadzamia’s testimony.