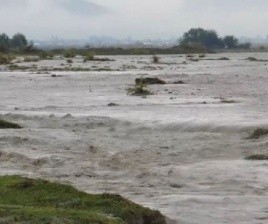 Two women are missing in Vani after a flood Sunday. (Interpressnews.)

TBILISI, DFWatch–Two women are missing after several villages were flooded Sunday in Vani, a town in the west of Georgia, after heavy rain.

Zaza Khurtsidze, head of Vani municipality, told Interpressnews that two women are missing. Three others went missing but were found shortly after.

He said all five were in a car which fell into the flooded river.

Other cars were also taken away by the flood water.

It appears that heavy rain made the river Kvinistskali spill over its banks, and a bridge connecting the two villages Inashauri and Saprasia collapsed.

The villages Saprasia and Amaghleba are hardest hit. Locals say livestock is dead.

Rescue workers are now searching for the two who are missing.

Representatives of the ministries of agriculture and regional development, the Emergency Situation Service and the local government have arrived in Vani.