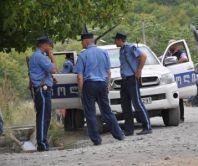 Police near the area where the fighting took place. Two of the dead 'saboteurs' have been identified as Georgian citizens. (IPN.)

TBILISI, DFWatch – The interior ministry says there were two Georgian citizens among the eleven who were killed during a police operation on the Russian-Georgian border. A few days ago, the ministry claimed that there weren’t any Georgians among the dead ‘boeviks’.

The interior ministry on Monday released a statement saying that seven corpses have been identified out of eleven. Two of them are Georgian citizens – Aslan Margoshvili, born in 1990 and Bahaudin Kavtarashvili, born in 1986. The ministry writes that their identities were disclosed because of the great public interest.

The remaining five persons are citizens of Russia from North Caucasus. One of them, Bahaudin Baghakashvili, born in 1986, had relatives in the Pankisi Valley in Georgia.

September 1, the ministry denied that there were Georgian citizens among the eleven dead that were part of a group of what it called ‘saboteurs’.

Nino Kalandadze, Deputy Foreign Affairs Minister today said at a regular briefing that relations with North Caucasus will continue to be normal despite the operation in a valley near the border.

She said Georgia has an open policy to the North Caucasus people and tries to deepen relations as much as possible.

Georgia August 30 started an operation on the Dagestan section of the Russian-Georgian border. The first phase of the operation was aimed at releasing three groups of hostages. All released according to the defense and interior ministries. Two law enforcers and one military doctor died in the operation, as well as eleven militants, or saboteurs, as the interior ministry calls them.