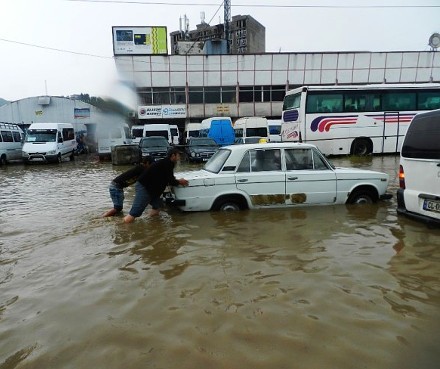 TBILISI, DFWatch–A 17-year-old boy has drowned in the river Abashistskali in Martvili, western Georgia. The boy’s body was pulled out of the river Friday morning.

Elguja Jamrishvili, head of the Underwater Federation of Georgia, who was searching for the boy, also drowned, but his body has not yet been found.

Vani City Council head Aleksandre Liluashvili told Interpressnews that Vani is the most affected place in the municipality, but smaller villages have taken a hit as well.

He said that it’s been raining rain almost non-stop for nearly a week. Small streams are flooded, roads damaged, houses and yards flooded.

Damages caused by the rain may be expected to continue increasing as it is still raining.

Flood damaged roads in Batumi, a city on the Black Sea coast. There are difficulties on the streets of Gorgiladze, Maiakovsky, Lermontov, Agmashenebeli and Bagrationi. First floors and basements and gardens are flooded. Emergency crews are helping with pumping the water out.

There was a landslide close to the tunnel connecting Batumi with the town Kobuleti. Clean-up work is underway.