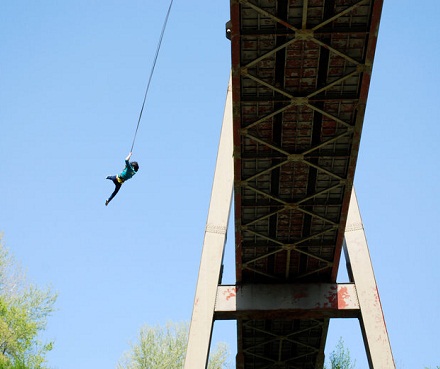 A man and a woman died after jumping off a bridge in Tbilisi Sunday, tied with climbers' ropes. (FB.)

TBILISI, DFWatch – A 23-year old woman and a 25-year old man died in a rope jumping accident in Tbilisi on Sunday.

The two jumped together from a bridge. The woman, Mariam Kandashvili, died on the spot, while the man, Goga Goletiani, was taken to hospital, but died at night.

The accident happened at a bridge nearby Tbilisi State University’s building in the Maghlivi district. The height of the bridge is 42 m and the free fall for jumpers is 33 m.

There is conflicting information about what happened. It appears that they were jumping tied with four ordinary climbers’ ropes, and either the ropes broke or they came loose from their attachment.

An investigation has been launched. The Interior Ministry released a short statement, which says that the organizers of the event have been questioned, but no further details are available.

Preliminary findings indicate that the ropes broke, but young people attending the event say the ropes didn’t break, but a part of the old bridge fell apart. This information is not officially confirmed. Emergency Service representatives say they will speak about the cause for the accident when the inquest is finished.

No one has so far been arrested in the case. The event was organized by two climbers, one of them is the son of the famous Georgian climber Bidzina Gujabidze.

In an interview on Youtube, the organizers talk about safety measures. They say they started rope jumping eight years ago, and later decided to organize such events for other people.

“We have two types of rope. One for bungee jumping and another one is ordinary alpinist ropes, which are tested,” one of them says, adding that such kind of ropes usually can handle one and a half ton of goods and they use four such ropes.

Witnesses say the rail where the ropes were attached gave way. (FB.)

Sometimes couples jump too, they say, and mention one time when a person weighing 130 kg jumped despite warnings, without incident.

A blogger Givi describes on his blog how he first jumped from this bridge and about his feelings. Later he decided to jump together with his friend.

He writes that a couple is only allowed to jump if they are organizers themselves, professional climbers or extreme sports enthusiasts, but ordinary lovers are usually not allowed to jump.

“The principle of such jumping is the following: Two potential jumpers stand approximately in a distance of two meters and are tied with ropes. On of them is tied to the main rope, which is tied to the bridge.”

Someone counts and one jumps with his back first, while the other one should follow face first.

“The difficulty of this jump is that both should jump simultaneously. If not, one will drag down the other one and they may get serious traumas.”

A blogger writes that they had difficulties assuring the organizers to jump together, but after they took responsibility for their health and not put each other in difficulties they were allowed to jump.

Places for jumping were sold Sunday from the website swoop.ge, which usually suggests sales on various services for their clients. This time Swoop offered rope jumping for couples.

“The rope which people jump with in Georgia is the same as they use in other countries. All details are arranged and bought from official dealers, who have ten year experience in this field,” the advertisement says.

It further says that every adult, healthy person can jump. Minors should come together with a grown-up.

“It is safe to jump, professional climbers take care of 100 percent of the security measures.”

(Below, the bridge is shown in Google Maps satellite view.)