TBILISI, DFWatch – Two workers died in a coal mine in Tkibuli in west Georgia after a shaft ceiling collapsed Sunday evening. 12 workers have lost their lives in the same mine over the last two years.

The collapse led to the death of Bondo Mikheladze (61) and Tamaz Gordadze (55), according to a statement released the following day by operator company Saknakhshiri, a subsidiary of Georgian Industrial Group (GIG). The statement says: “According to preliminary information, the accident was caused by a massive mining concussion.”

The cause of most accidents in the mine has been given as negligence by the workers. But the Georgian Trade Union says that it’s really difficult to determine what is causing so many explosions and accidents at the mine.

“Small vibrations happen frequently at mines. It’s always very hard to find out what really happened. They usually keep the other defects behind ‘massive concussions’ secret. Safety rules are often violated in the coal mine,” Dolidze says.

Tamaz Dolaberidze, leader of the Metallurgical and Mining Industry Workers’ Trade Union, says that there the concussion theory is supported by the facts brought out so far.

“There are special regulations for the prevention of mining massive concussion, like coal water treatment. We found out that these measures have been taken and it seems the vibration capacity was very large. The question is how well the coal is protected from such danger.”

But he added that despite these assumptions, the case is not yet investigated and a special commission is to set up to get a more complete picture of what happened.

“An important fact for us is that the administration allowed one Trade Union representative to be a member of this commission and he or she will participate in the investigation process, which is very important,” Dolaberidze Says.

“Nobody knows and will ever know what happened there, when it happened – during drilling or collapsing works… A very small network knows about it,” Viktor Dolidze told DFWatch. “And the investigation is conducted by the government, as usual.”

The results of government investigations are often inconclusive. In March 2010, 4 workers died and one survived as a result of an explosion at the same mine. The report from the investigation, which was only three pages long, blamed what happened on the workers. But the Trade Union proved on the basis of the report that the explosion was caused by failure by the company to follow basic safety rules and giving incorrect instructions to the workers.

After an explosion in Tkibuli coal mine in January 2011, the president demanded that those responsible be punished. As a result, two mine workers were arrested for violation of safety norms.

Also on September 9, 2011, a worker lost his life in Tkibuli coal mine. The reason for his death is still unclear, and trade union and the administration have different versions of the accident. The administration always ends up pointing to workers’ negligence while the trade union claim that basic safety rules are not adhered to in the mines.

The Georgian Labor Code has been criticized a number of times by the EU, the International Labor Organization (ILO), and American trade unions, recommending that it be changed. The main problem they have is that the law doesn’t secure enough rights for the workers but perfectly fits the employer side. But as of today there are no plans to change the code.

The current labor code allows an employer to without giving any reason fire workers. For people in poor villages like Tkibuli, a small town in Georgia’s Imereti region, families have had to agree to working under such dangerous conditions.

But there are some regulations that offer protection. There is for instance the Security Rules of Coal Mining which puts certain obligations on the owners to take preventive measures.

When it comes to compensation, the statement from the mining company Saknakshiri says that they will cover all costs. But Viktor Dolidze claims that they usually only cover the costs of the funerals, as back in 2010, when four workers died. Georgian legislation guarantees the right of affected families to receive compensation, but usually the companies do not fulfill this obligation and people don’t know their rights. 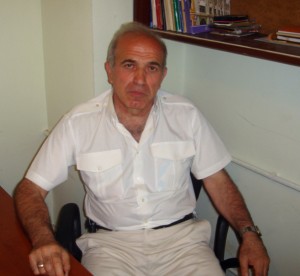 Viktor Dolidze says the mining company usually only pays for the funeral. They are obliged by law to offer compensation to affected families, but most people don't know their rights. (Photo: Mari Nikuradze.)

Article 35 of the Georgian Labor Code deals with labor safety, but it’s very general and there are very few obligations for the employers.

The European Commission issued an intermediate report about the labor code in Georgia on April the 3rd 2008 which, following translation from Georgian, reads:

“The labor Code of the year 2006 was prepared without any consultations with Professional Unions and does not correspond to international standards. To be more exact, the Labor Code says nothing about obligations concerning the freedom of unions defined by the International Labor Organization. The Labor Code contradicts the European Union standards as well as the standards of the “European Social Charter” ratified by the Georgian Parliament in July 2005. If Georgia intends to continue using “General System of Privileges” of the European Union from 2009 changes are mandatory to be made in the Labor Code.”

However, the Georgian government has not made any significant changes to the code.