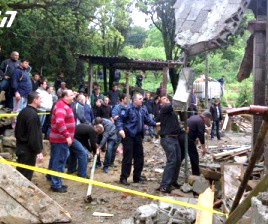 TBILISI, DFWatch–Two workers died after the dome of a half-finished church collapsed in a small village in the Adjara region in the south western part of Georgia.

The accident happened as five construction workers under the age of 30 were working on a new church in the village Akhalsopeli.

According to Mamuka Turmanidze, acting head of Adjara’s Emergency Service, the dome was about 50 tons and four of the workers were under it when it collapsed. The fifth managed to jump away. After rescue work which lasted for two hours, two of the workers were dead. 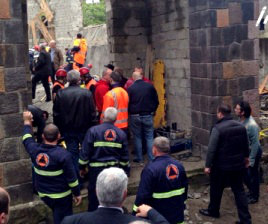 Interpressnews quotes Tamaz Gogitidze, a Akhalsopeli resident, who says he thinks the reason for the collapse might have been columns were removed. Another cause might have been defective construction material, he believes.

Archil Khabadze, head of the Adjara government, came at the site of the accident and said medical personnel are doing their best to save the lives of the two survivors.

Priests were also present but didn’t give comment to the media.

Locals say the construction of the church has been going on for about four years.