Two boys on life support after being stabbed at Tbilisi school

Two boys on life support after being stabbed at Tbilisi school 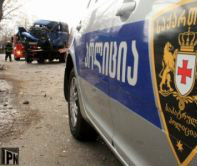 TBILISI, DFWatch–Two teenage boys were hospitalized with serious injuries on Monday after being stabbed by another pupil at the same Tbilisi school.

Police detained a suspect, who is also a minor.

All three are pupils at Public School No 186 in Didi Digomi in northern Tbilisi.

According to the school’s principal, the two ten graders were stabbed with a knife at a bus stop after class, allegedly by another boy who is attending the same school.

The Interior Ministry said the suspect managed to escape. The two stab victims were taken to hospital. They have injuries in the stomach and lung regions and both are on life support.

Police questioned their classmates. The case is investigated as intentional severe damage to health.