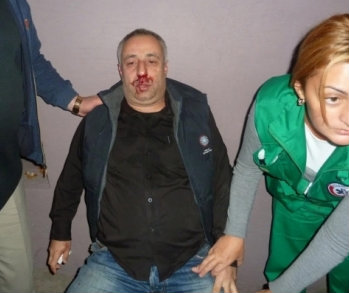 Journalist Zaza Davitaia threatened retaliation after being injured in the clash. (Interpressnews.)

TBILISI, DFWatch–Two groups of politically motivated youth clashed on Tuesday, inflicting injuries on each other.

The conflict started after activists from the pro-National Movement youth group Tavisupali Zona (Free Zone) severely beat a journalist from a conservative newspaper.

Both sides blame each other for provocations. Soon after the beating of the journalist, youth from Tavisupali Taoba (Free Generation), a group consisting of conservative youth and people who regard themselves as former political prisoners, tried to break into the Free Zone office in Tbilisi.

That resulted in beating and minor injuries from both sides and eventually the police managed to deescalate the situation. The leader of Tavisupali Zona, former MP, Koba Khabazi, was also injured.

Some high level members of the National Movement rushed to the office, blaming the current government for provocations.

The confrontation started a few hours earlier when a group from Tavisupali Zona severely beat Zaza Davitaia, a journalist from Asaval-Dasavali, a popular weekly publication, with strong conservative stance and often blamed for homophobic coverage, especially against LGBTI people, Muslims and the Armenian minority.

Zaza Davitaia is a former prisoner, arrested during the Saakashvili government allegedly for attempting a coup with the support of Russian intelligence. He was freed in a mass amnesty soon after  the change of power after the 2012 parliamentary elections.

Accounts of what happened differ significantly. Zaza Davitaia and his colleagues from Asaval-Dasavali claim that the journalist was attacked by between 10 and 15 Zona members.

At the same time, Zone members accuse Davitaia of downright provocation. Zona insists that the journalist approached the Zona member, calling him names and even punching him. The Zona activist, Parnaoz Chkadua, had to respond.

Davitaia has multiple injuries, including a broken rib and brain concussion.

Speaking from Ghudushauri hospital, where he is still being treated by doctors, said that he was ‘ambushed’ by Zona members at the doorsteps of the Asaval-Dasavali office and flatly denies any provocation from his side. In the comment he also threatened retalitation against Zona for his beating.

The police arrested two Zona members, Parnaoz Chkadua and Dato Gogokhia. Their attorneys argued that they had been mistreated and even beaten by the police. The police categorically denies this.

Tavisupali Taoba is a group of conservative youth and former prisoners, who regard themselves as a former political prisoners. Opponents say the group is supported by the Georgian Dream coalition.

Zaza Davitaia, a former prisoner, was released in the 2013 amnesty and regards himself as a political prisoner too. There had been a number of confrontations between these two groups prior to Tuesday’s conflict.