TBILISI, DFWatch – Journalists at Maestro were pacing nervously around in the TV station’s yard Wednesday afternoon, still physically prevented by police from entering their studios to reestablish normal broadcasting.

Inside the studios, behind locked doors, producer Mamuka Glonti was leading an emergency broadcast with a few other journalists and technicians, who managed to enter before police sealed the studios. 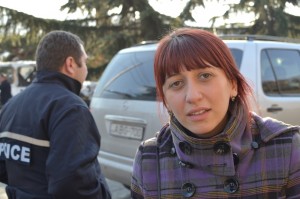 Tamuna Babunashvili and her journalist colleagues at Maestro TV are waiting to be allowed by police to continue their daily business and reestablish normal broadcasting. (Photo is copyright DFWatch and may not be reproduced without permission.)

Early in the morning, Kitsmarishvili said he is in his full rights to intervene with the channel’s editorial policy. He fired three of the top people: Mamuka Glonti, co-founder and current producer, the general director Ilia Kikabidze and Levan Chikvaidze.

Kitsmarishvili said that these people have a share in Maestro, so they were fired in terms of their role as employees, and not as shareholders.

Maestro journalists have released a statement about the dramatic development:

“We strongly disagree with the way that Kitsmarishvili activities are implemented towards Maestro. We are all still proud of our editorial independence and the desire to have, and we believe that our work should be continued as we had been working before,” the statement says.

They demand that Erosi Kitsmarishvili, and other people who came with him, immediately leave the building so that the journalists are able to carry on with their ordinary work.