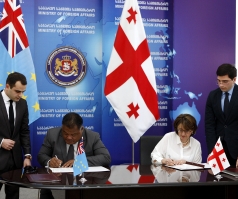 TBILISI, DFWatch–Tuvalu has withdrawn its recognition of the Georgian breakaway regions Abkhazia and South Ossetia.

A government delegation from Tuvalu is visiting Georgia these days to sign a protocol establishing diplomatic and consular relations between the two states.

According to the Georgian Foreign Ministry, the protocol says the two states agree to develop friendly relations, sovereign equality based on cooperation, territorial integrity and principles of not interrupting each other’s domestic affairs.

The foreign ministers signed the protocol, which says Tuvalu recognizes Georgia’s territorial integrity ‘within its internationally recognized borders’; which means it considers Abkhazia and South Ossetia as part of Georgia.

The protocol revokes a decision by Tuvalu in 2011 to recognize the two regions.

Vanuatu withdrew its recognition on July 12, 2013.