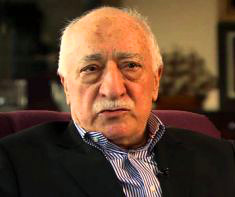 The Turkish government accuse Fethullah Gülen (pictured) of being behind last Friday’s failed coup attempt. Gülen’s movement runs a number of schools around the world.

TBILISI, DFWatch–Turkish consul in Batumi Yasin Temizkan has called on Georgian authorities to close down a private school in the city because it is fostering terrorism.

The Şahin schools are funded by the movement of Fethullah Gülen (pictured), a Turkish preacher, philanthropist and politician who has been living in exile in the United States since 1999. Gülen is at odds with Turkish president Recep Tayyip Erdoğan and was recently included on the Turkish government’ list of most wanted terrorists. However, no reliable proof of Gülen’s or his adherents’ involvement in terrorist activities has surfaced so far.

Turkish authorities accuse Gülen of being behind the recent attempted coup d’état and have demanded his extradition from the U.S., which has rejected to extradite him in the past, arguing that he is not connected to terrorism.

In the rare interview, Gülen suggested that the coup attempt might have been staged by Erdoğan himself in order to get rid of his political opponents.

The Şahin school in Batumi is one of the most expensive and prestigious private schools in the city.

“These people [Gülenists] strengthen their positions through schools, bringing up new generations which serve terrorists organisations instead of the state. Unfortunately, there are such schools in Adjara, one of them being the Şahin school. I’m calling on the inhabitants of Adjara not to send their children to this school. I’m going to turn to Georgian authorities soon to close the school belonging to this organisation [the Gülen movement],” consul Temizkan said in a televised interview. The interview was conducted in Turkish, but translated to Georgian by the consulate’s interpreter.

Later, the Turkish ambassador to Georgia claimed that the consul had been misinterpreted by the media, according to a statement issued by the Georgian Ministry of Foreign Affairs following a meeting between the deputy foreign minister and the ambassador.

However, the local television channel TV 25 published the full footage of the interview, which seems to contradict the ambassador’s statement.

Today, Georgian Prime Minister Giorgi Kvirikashvili began an official visit to Turkey, accompanied by a group of parliamentarians. Kvirikashvili met with his Turkish counterpart Binali Yıldırım and Speaker of Parliament İsmail Kahraman. During the visit, the Georgia–Turkey Strategic Cooperation High Council will hold its first meeting and agreements on cooperation will be signed by the Georgian and Turkish governments.