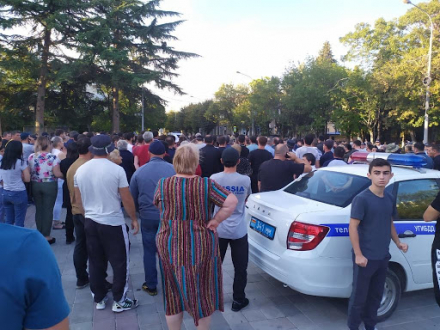 The de facto leader of breakaway South Ossetia Anatoly Bibilov dissolved “the government” Friday evening after hundreds of people rushed to the central square of Tskhinvali to protest a death of young man in Tskhinvali hospital.

Inal Jabiev, 28 y/o, was suspected of attacking de facto minister of interior Igor Naniev. The latter’s car was shot at in August 17. No one was injured during the incident. Along with Inal, his twin brother was also arrested.

Jabiev was ferried to hospital from a police precinct where he reportedly was tortured.

The photos of his dead body have been circulated in the internet showing clear signs of severe torture.

The public outcry was so strong Bibilov had to summon extraordinary session of the de facto parliament.

Naniev has been suspended from his office during investigation of Jabiev’s death.

The crowd was still at the Tskhinvali central square Saturday early morning.